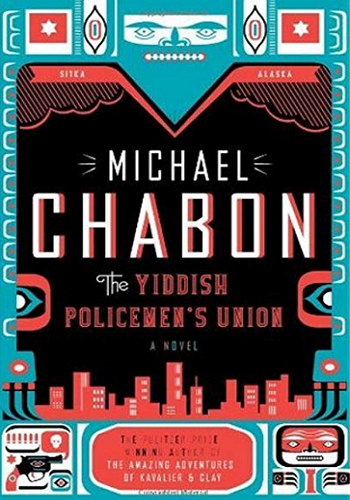 "These are strange times to be a Jew."
Advertisement:

The Yiddish Policemen's Union is an Alternate History detective novel by Michael Chabon published in 2007. It received the Hugo Award for best novel, as well as other awards.

The year is 2007 and nobody in the Federal District of Sitka knows what the future will be made of. The rain-soaked territory in the Alaska Panhandle became the last refuge of the Jews after the state of Israel was stillborn in 1948, and the United States is going to reclaim it in a few months. Meanwhile, hard-boiled and chronically depressed detective Meyer Landsman of the District Police has a murder case on his hands. In the very rathole of a hotel where he has washed up, a man with a false identity has been executed, contract-style.

Teaming up with his long-time partner Berko Shemets, his cousin and half Tlingit Native American, Meyer tries to elucidate the case before the deadline of Reversion, when the entire district will cease to exist and he'll likely be out of a job. The investigation takes him into the reclusive world of an ultra-Orthodox Jewish sect, where word had it that the murder victim might have been the Messiah of prophecy...

The Coen Brothers were working on a film adaptation of the novel, but the project seems to have been cancelled. However, in January 2019, CBS acquired the script from Chabon and his wife for a possible TV series.