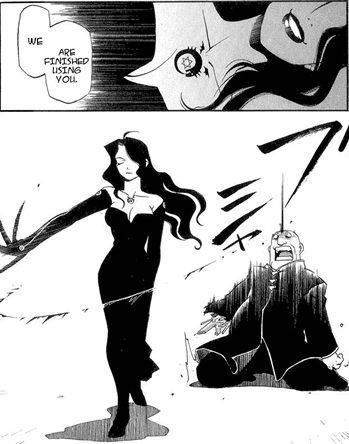 "A puppet that can no longer be used is mere garbage. This puppet's role has just ended..."
— Majora, The Legend of Zelda: Majora's Mask
Advertisement:

To show or remind the viewer how nasty the Big Bad or his Evil Minions are, a common trope is their habit of callously disposing of anyone who is no longer useful to their plans, whether it be an associate of an evil organization who has just concluded their useful function within that organization, or an outsider who the villain has coerced or tricked into carrying out part of their plan who is killed once they have done what the villain has ordered. It is often punctuated with words to the effect of "Your services are no longer required", "you have served your purpose", or of course the title phrase before the murder.

In the case of a bribed outsider who was only loyal for the promise of money, this does make a little sense. Not only does the Big Bad avoid having to pay them for services rendered, but they remove a direct link back to them as the master of the plot. And there's always the fact that someone who's more loyal to the money than to the cause is a risk to betray the Big Bad to whoever offers them more. Alternatively, it could be to punish a minion for asking for a raise, especially when done right before the critical mission, with the implication that the minion is aware of their own importance and intends to use that as leverage. This is an especially common tactic for dealing with those who betrayed their own side on the villain's orders, who villains will often have Rewarded as a Traitor Deserves — villains are a rather backstabbing lot, and are rather not keen on getting backstabbed themselves.

If two or more villains are reluctantly working together for the same or similar goal, then typically one or the other will give subtle or not so subtle hints that they intend to dispose of their ‘partners’ once they’ve accomplished their goals. If the villain in-question is a particular type of hard-ass with a gun, then they are a Pushy Gun-Toting Villain.

Compare You Have Failed Me (when the executed underlings are killed because they didn't succeed), Rewarded as a Traitor Deserves, We Have Reserves, and Uriah Gambit. Shoot the Builder, Shoot the Dangerous Minion, Devour the Dragon, and Eat the Summoner are subtropes. Contrast Can't Kill You, Still Need You and Mook Depletion. See also Villainous Demotivator and Even Mooks Have Loved Ones.