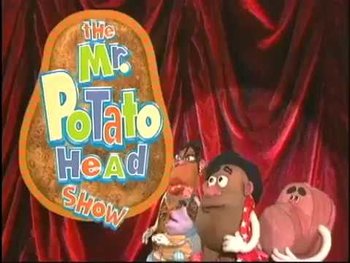 The Mr. Potato Head Show was a short-lived 1998 Puppet Show on Fox Kids based on Mr. Potato Head. It lasted 13 episodes before being canceled. Afterwards, a Direct to Video movie was produced, in which... well, the show gets canceled.

Somewhat infuriatingly, the movie is just the last two episodes back to back with 20 minutes of padding that were nothing but little skits taken from other episodes that have nothing whatsoever to do with the plot at hand.

The movie is somewhat redeemed by the fact that there's a little production documentary with in-character commentary at the end.

Yes, the show was sort of about Mr. Potato Head having a TV show. Potato Head battled with the TV execs (who are most certainly evil, and they won't let you forget it) many times, including in the movie.