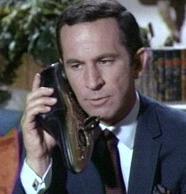 A classic element of any Spy Drama or spoof thereof. A spy's Plot Technology must inevitably be disguised as mundane objects. This can run the gamut from the practical to the ridiculous.

If an episode is to feature a gadget in some way, it will be introduced to the agent and the audience in a scene early on, usually by the Techno Wizard that built it. This scene has a few stock jokes of its own. They usually include the agent almost setting it off, not realizing it's really a gadget; a lecture by a Q-inspired briefing officer on the proper way to use it, and a stern warning not to play with it or break it as the agent did the last ones he was issued. In addition, nowadays the agent mistaking an actual mundane object for a gadget is practically required by all but the most serious examples.

And, in accordance with the Law of Chekhov's Gun, every item introduced in the beginning will be used later in the story, even if it was just an ordinary object (except for Q's lunch, which is used off screen, by Q).

This trope owes its existence mostly to James Bond, but real-life objects like this have been used by spies since the Revolutionary War or earlier.

Favorite objects to use as hiding places:

The more mundane the object, the better. Can be subverted when an agent assumes that a mundane object is a gadget, when it is really just what it looks like. This appears enough to make it an Undead Horse Trope.

Can be inverted if a gadget (say, a gun or a grappling hook) is modded to be mundane (say, a pen).

A collection of seemingly mundane items that can be assembled into a functional weapon is called a Scaramanga Special. See also This Banana is Armed, Prop, and Spy Cam.