Pie in the Face 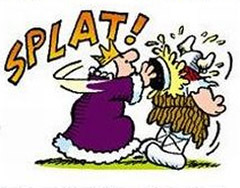 A classic gag, tossing a pie into another person's face. Usually, this is a cream pie to get the proper Covered in Gunge effect. For extra comedy value, the victim might take a taste of the pie and note it's not bad.

This Practical Joke was a staple of silent movie comedies, which came up with most of the variants. Often, a missed throw would result in an Escalating War pie fight. The all-out pie fight is a Forgotten Trope in movies, but still shows up elsewhere. A popular gag with this trope is where someone tempts fate by yelling "Let me have it!".

Real Life celebrities and politicians sometimes have this happen to them as a protest. For example, Anita Bryant and Bill Gates have been pied in public. note Authorities take this very seriously, in fear of what might be also in the pie, or just because an assailant was able to get that close.

On TV, the pie is often just whipped cream or shaving cream sprayed into a pie pan, which gives a similar effect while being much cheaper than baking up a whole pie just to throw it. Shaving cream is often considered better aesthetically than whipped cream, as unlike whipped cream, shaving foam does not melt under hot studio lights.

The trope is also one of the most common and ancient forms of Slapstick Knows No Gender and has been applied universally almost ever since its inception.

See also Edible Ammunition, Food Fight, Food Slap, Food Shove Gag, I Taste Delicious, Produce Pelting, as well as Carrying a Cake (this is one possible, but not inevitable, result of performing that trope badly).