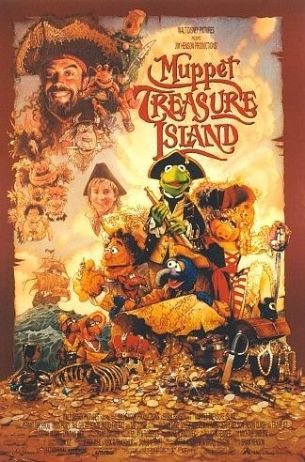 "True friendship and adventure
Are what we can't live without
And when you're a professional pirate,
That's what the job's about!"
— "Professional Pirate"
Advertisement:

Brian Henson's 1996 take on the classic Treasure Island story by Robert Louis Stevenson, featuring the old cast favorites of The Muppet Show, and Tim Curry playing Long John Silver. In the English seaside in the 18th Century, Jim Hawkins, played by Kevin Bishop, is now given two friends... Gonzo and Rizzo, who are once again paired together as a comedy team and are the focus for much of the movie. When sailor Billy Bones (Billy Connolly) warns of a treasure that legendary pirate captain Bernie Flint hid, and Jim's harridan-employer's inn is burned down by Flint's surviving pirate crew, Flint's treasure map ends up in Jim's possession. Fozzie Bear (playing rich-dolt Trelawney) confirms the map's authenticity, so they all set sail on the Hispaniola to find the treasure. Bunsen Honeydew plays Dr. Livesey, Kermit the Frog plays the ship's master Captain Smollett, Sam the Eagle is Mister Arrow, the first mate. Miss Piggy plays a gender-flipped version of Ben Gunn; a castaway marooned on the relevant island.

It isn't that high on the radar for most of the public memory, but is considered by fans to be one of the darkest and grittiest Muppet films and one of their funniest productions.

Followed by Muppets from Space.

Keep in mind that this is a puppet Consulting Mister Puppet. Yeah.

During a period of no wind, the majority of the crew suffers this... and have a sudden large musical number about it.

During a period of no wind, the majority of the crew suffers this... and have a sudden large musical number about it.