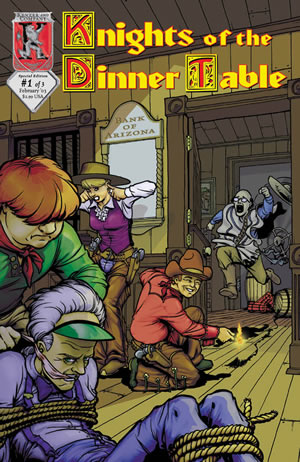 Similar to Vapor Trail but generally with a different intent.

A trail of gunpowder is laid as a makeshift fuse, leading to a pile of explosives (usually barrels of gunpowder). Once lit, the trail smokes and sparks impressively and the hero will have to race the burning powder to scuff out the line before it reaches the explosives. In a comedic variation, a character will unknowingly leave a trail of powder behind him as he is stockpiling explosives, allowing another character to casually light it, blowing the first character to kingdom come.

Tested and confirmed by the MythBusters. This is one of the few explosive myths they've tested that worked in real life pretty much exactly the way it is portrayed in movies. And, just like the movies, it was also possible for a person to outrun it or just scatter the trail. And if you're carrying a leaky barrel of powder that is producing a trail in your wake, it is entirely possible that, should that trail be ignited, the fire will catch up to the barrel and light it off if you're traveling at a slow walk.

If the powder is too wet, the trail may prove to be a Hard-to-Light Fire.

May lead to a case of Explosive Stupidity.