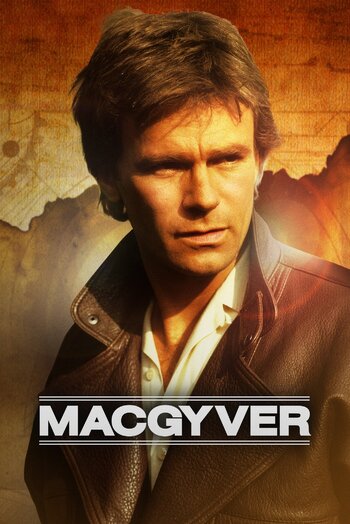 Barbara Spencer: Blow an opening. With what? Don't tell me you know how to make a bomb out of a stick of chewing gum?
MacGyver: Why, you got some?
— Pilot episode
Advertisement:

Adventure TV series, running from 1985 to 1992, starring Richard Dean Anderson. The title character didn't like guns (after a friend of his died in a revolver accident when he was a child), preferring to solve problems with his intelligence, resourcefulness and improvised gadgets. He often created some device worthy of Rube Goldberg out of whatever odds and ends were at hand, which is why MacGyvering is named after him.

In the first season, he was an agent for the "Department of External Security", after which he left in favor of a philanthropic Heroes "R" Us organisation called the Phoenix Foundation for Research, an organization that, if not a front for the CIA, is almost certainly on its speed-dial, where his boss was one Pete Thornton (played by Dana Elcar).

Mac would travel all over the world performing missions for good ol' Uncle Sam, retrieving spy satellite information and helping defectors from Commie Land get to the United States, but spent most of his time in California. He seems to have had several Busman's Holidays as well. The man seems to have had a plethora of ex-girlfriends and "old friends", who would turn up every so often, usually in need of help, though more often than not they would get killed in the first few minutes of the episode. As the show went on, an increasing percentage of episodes were devoted to Mac's attempts to help an old friend out of trouble.

Among the show's cast of recurring characters were Pete Thornton (Dana Elcar), Mac's boss and friend at the Phoenix Foundation, Jack Dalton (played by veteran character actor Bruce McGill), airplane pilot, part time spy, and con artist, who was constantly embroiling Mac in backfiring get-rich-quick schemes, and Murdoc (played by British Rock Singer Michael Des Barres), an assassin for "Homicide International Trust", reputed Master of Disguise, or so we're told. He had a penchant for leaving every episode by falling off of something very high while shouting an enraged "MacGyver!", only to show up later down the line having survived his accident. Mac's most featured love interest was the scatter-brained Penny Parker, played by Teri Hatcher before Lois & Clark or Desperate Housewives.

It is however, probably true that later seasons had a few too many Very Special Episodes, an indulgence that likely led to its declining popularity. Still, the show remains hugely memorable in the US (it was heavily referenced in the The Simpsons as a favorite show of Marge's sisters, Patty and Selma, and is parodied in the regular Saturday Night Live skit MacGruber where Richard Dean Anderson once made an appearance). It shows in prime-time in Indonesia and Ukraine. It initially ran on The BBC in the UK before moving to ITV.

The show has had its fair share of spin-offs and other productions. Following the end of the series a few television movies were made continuing his adventures. In the early 2000's a pilot episode was shot called Young MacGyver featuring Mac's nephew Claynote even though he was an only child joining the Phoenix Foundation, starring Jared Padalecki, but was not picked up. A Film Of The Series was in consideration for years but never materialized. In 2015, in partnership with the National Academy of Engineering the original series creator invited people to submit ideas in remaking the show.

The series was a production of Paramount. One of the show's producers was Henry Winkler, a veteran of Paramount's Happy Days, also on ABC.

As an ABC program, MacGyver led into the network's presentation of National Football League games, Monday Night Football, from 1986 to 1991, covering six seasons, which was longer than any other ABC program that did the same, including several Paramount productions that went one-and-done as an MNF lead-in.

In 2016 (with no overt connection to the prior project), a new series pilot starring Lucas Till was picked up. A complete remake, this time MacGyver is paired with two other agents to form a Power Trio as they handle high risk cases.