Madwoman in the Attic 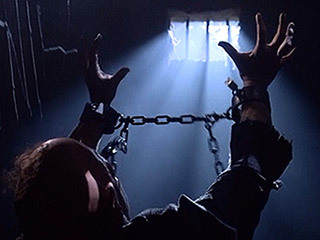 I swear on my life, they've got... an "It", a giant "It". They got it chained to the wall.
Dr. Hibbert: But what to do with poor Hugo? Too crazy for Boys Town, too much of a boy for Crazy Town. The child was an outcast. So, we did the only humane thing.
Homer: We chained Hugo up in the attic like an animal and fed him a bucket of fish heads once a week.
Marge: It saved our marriage!
— The Simpsons, "Treehouse of Horror VII"
Advertisement:

This is when a character with mental problems and/or physical deformities is locked away because they will never fit into society, usually either in the attic or in the basement. The more of a Big Fancy House, the better; in fact, the smarter ones will sometimes have a secret system of peepholes and secret passages so they can move around as they please.

In stories about this type of character, the protagonist is frequently an outsider, wondering what kind of bizarre secret the Corrupt Hicks are keeping. The Madwoman will then either tend to be Dragon-type enemies with little personality of their own, or they're The Grotesque, sympathetic victims. When done well, this can be an effective scare because it so aptly encapsulates the frightening insularity of the Town with a Dark Secret.

This trope is named for the landmark work of feminist literary criticism by Sandra Gilbert and Susan Gubar, referring to Mr. Rochester's wife in Charlotte Brontë's Jane Eyre. The analysis indicates that this trope first popularly appeared, of all places, in Victorian women's literature, where depicting some women as crazy people was an easy way to make female villains with whom readers would be unlikely to sympathize. Obviously, this plan was not a complete success.

Of course, it can be the case that there was a very good reason this person was locked away in the first place. Maybe they're Ax-Crazy, maybe they suffer from an extremely contagious form of illness, or perhaps the person is being hidden for their own safety to keep them from being kidnapped or murdered.

Usually Ax-Crazy and/or The Grotesque, and sometimes Inbred and Evil. Compare Man in the Iron Mask. Non-consensual sub-trope of The Shut-In, and one possible form of being Sent Into Hiding. If the madwoman is instead a monster, see Supporting the Monster Loved One. If the character has recently moved into a new house which is already occupied, or a person moves in secretly while someone else is living there obliviously, it's Secret Squatter.

Not to be confused with the company involved with the first season of Smash. Or the episode of The Sarah Jane Adventures which also borrows its name from the book (but isn't an example). And even more so, don't confuse with the Basement-Dweller, who is free to come and go as he pleases, and is not (usually) a danger to himself or others.