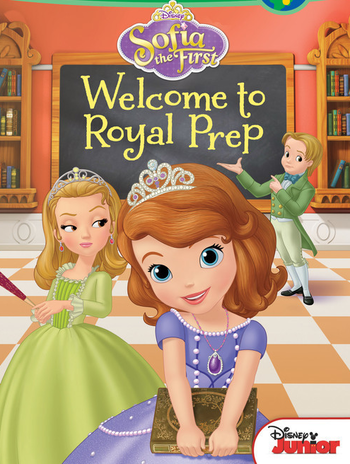 "The dorms are exquisite, but the homework's a royal pain!"
A subtrope of the Extranormal Institute, but rather than paranormal power the students have Royal Blood.
Advertisement:

Conveniently, it mixes every little girl's dream of being a princess with the modern duty of going to school.

For that reason, young girls are usually the target audience and, consequently, it tends to be an all-girl school. After all, princes are a less interesting population, aren't they? Even if a Prince Charming sister school exists, their pupils will only ever be seen when invited for Dances and Balls. Due to the audience's age, it will usually be an elementary school.

Don't expect lessons like maths or literature, rather poise, curtsy, waltz, good manners, arts, horse riding lessons, and sometimes Fencing, as well. In a nutshell, Lessons in Sophistication. If the setting is Medieval European Fantasy (which is common), expect magic lessons.

Don't expect a typical school building, either. Instead, expect something like a huge Bright Castle. More often than not it will be a Boarding School, with a fancy collective dormitory room: pink walls, canopy beds and satin sheets. Expect a banquet room instead of a cafeteria, throne-shaped chairs in the classroom, and a carriage instead of a school bus. The school dance will be a fancy ball in a dedicated ballroom.

The students will wear a Pimped-Out Dress on a daily basis and a tiara at all times, even in bed. High-Class Gloves may or may not be included. An army of maids will usually take care of them, brought by pupils themselves if not provided by the school.

The local Alpha Bitch will be an heiress, from a powerful empire and/or richer family than anybody else. She will usually pick on the "poor" princesses from the smallest kingdoms or with a commoner past.

The main protagonist will usually be of the latter type who never knew she had Royal Blood, or was given a scholarship by an Anonymous Benefactor, making her a perfect Audience Surrogate. Otherwise, she'll be familiar with her royal heritage, but ignorant of the school subjects. Being The Hero, she'll be Spoiled Sweet.

Teachers will be kings, queens, or fairies. There is Fridge Logic in this, such as wondering why the monarchs are teaching rather than ruling their countries, or just how many monarchies there are in the world to support such a large student body?

In Real Life, schools for royal children never existed. Princesses, as well as other nobles, were home schooled before the advent of compulsory school. Modern princes and princesses attend upper class academies amongst commoners since, logically, there aren't enough royal children to justify a school.

Related to Gratuitous Princess, Princess Phase and Lessons in Sophistication.

Note: In shojos mangas, schools with the exact appearance of royals academies will show up frequently. They're set in a castle, including a ball room, but it's co-educational and students wear ordinary uniforms because they are filthy rich rather than royal. Examples include Mei-chan no Shitsuji school, Ohtori Academy, Ouran Academy, St. Marie Academy, and so on. A case could be made for including Hope's Peak in the list, but that turned out to be very false advertising.

Works set in these exclusive schools will almost certainly have a Cast Full of Rich People.