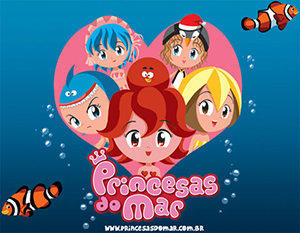 Animesque to the max!
Advertisement:

Sea Princesses (known as Princesas Do Mar in Brazil and Ojo no Umi In Japan) is a chidren's animated series that debuted in 2007, based on a series of books created by the Brazilian writer and cartoonist Fabio Yabu. The series was produced by the Spanish studio Neptuno Films and the Australian distributor Southern Star Entertainment.

The series plot takes place in the underwater world of Salacia, home of numerous kingdoms named after sea creatures. Three princess girls, the show's protagonists, live, go to school and play together as friends: Polvina, the Octopus Kingdom princess; Tubarina, the Shark Kingdom princess and Ester, the Starfish Kingdom princess.