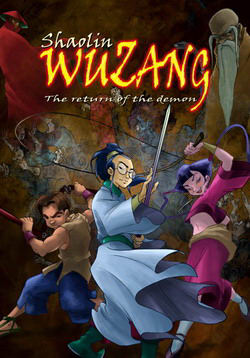 Many centuries ago, in imperial China, a demon named Heihu is terrorizing the province of Henan. His followers, thugs calling themselves the "Black Foxes", plunder and raze villages, making life miserable. The population turns to the three knights of Shaolin for help, who succeed in sealing Heihu away in a magical prison. The Black Foxes eventually break up, and the land is at peace once more.

Fast forward a thousand years to the early 17th century, where Heihu's prison has finally weakened, allowing him to escape. He possesses a nearby woman who happens to come across his prison, then immediately sets out to restore his power. Gathering a new legion of Black Foxes, he turns his sights to the Books of Power — sacred artifacts containing the secrets of the gods. Nobody knows where the Second Book of Power is located, but the first is kept at the Temple of Shaolin. He succeeds in stealing it away, despite attempts to stop him.

Well aware of the situation's graveness, the grand master Sanzang consults the spirits of the past grand masters of Shaolin. They tell him that only three people will be able to defeat Heihu for good: the reincarnations of the three Shaolin knights who succeeded against him one thousand years ago. Sanzang finds the three of them — and they're just kids. They're going to need years of training before they're ready to take on Heihu, but it's the only way. Their names are Hua, Tang, and Cheng; they are the Shaolin Wuzang.

The entire French dub is officially available on YouTube here