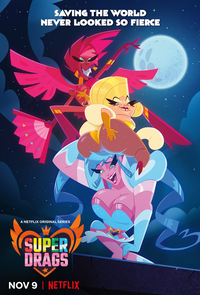 Super Drags is a Brazilian adult animated series airing on Netflix. The show follows the adventures of Patrick, Donizete, and Ralph, friends who work in a department store and become three heroines: Lemon Chifon, Scarlet Carmesim and Safira Cyan, the Super Drags, responsible for protecting the LGBT Community. A trailer can be viewed here

. An additional two seasons were on the script stage until it was announced that the show had been cancelled due to low viewership.