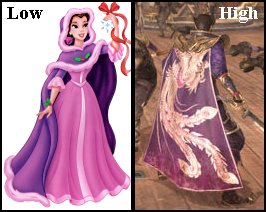 A Pimped-Out Cape can be done in many ways, from simply edging it with furnote Beauty and the Beast to covering most of it with gold embroidery.note Dynasty Warriors 7
Advertisement:

A rarely stated, but fairly common, belief here is that some tropes are rigid, and that the only variation comes with Playing with a Trope. Or some here think that most tropes are rigid, unless "Sliding Scale" is in the name. But it's not really true at all (also the reason we have The Same, but More). This belief often manifests in examples as citing the trope name, but with emphasis added on a changed word.

Even in the most narrowly defined Sub Tropes, there is plenty of room for variation, even when playing straight. There can even be degrees of how the trope is applied, which is certainly the reason we don't allow The Same, but More.

Two of the most common variations for a trope are the scale, and the importance in the story. But, there are quite a few other ways to allow for trope variations.

The only actual thing rigid about tropes is the cutoff between one trope and another, or at least that is what we are striving for. Even when it involves Super Tropes and Sub Tropes, or if there is overlap with another trope, those tropes are still separate.

So, the next time you think a trope is separate from another trope, make sure the line is clear. If it's not, you didn't make a mistake, other than to underestimate how flexible tropes are.

Contrast Square Peg, Round Trope (when an example doesn't fit the trope no matter how you twist it around).

To best illustrate this concept, examples should be straight uses, with only some playing with them

Alternative Title(s): Tropes Are Not Narrow