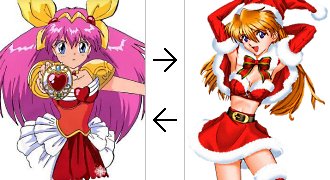 Minidress of Powernote from Wedding Peach and Sexy Santa Dressnote from Neon Genesis Evangelion are both skimpy dresses for Fanservice, but otherwise different purposes.
Advertisement:

For the list of tropes about literal sisters and brothers, see Sibling Tropes.

What happens when The Glorious War of Sisterly Rivalry switches genders? Cain and Abel. What's the difference between The Scrappy and a Creator's Pet? Authors love their Pet. Is this introductory paragraph trying to explain by example a Xanatos Gambit or a Batman Gambit?

When defining a trope, it often helps to establish its similarities, differences and relationship to other tropes; a common convention on this site is to refer to some tropes as Sister Tropes.

When two or more tropes have some overlap in their descriptions, "parentage", or use, but not enough for one to be a Sub-Trope or Super-Trope of the other, these are called Sister Tropes. That is, both have a similar form or function, either by category (character, plot) or by effect (characterization) rendering them both similar but distinct enough to be considered sisters.

These are the four ways tropes can be sisters:

Sometimes when two distinct tropes serve almost exactly the same function or have very subtle differences in description, it can reach the point that they are used almost interchangeably. Bad Flanderization! Bad! The Canonical List of Subtle Trope Distinctions is your friend.