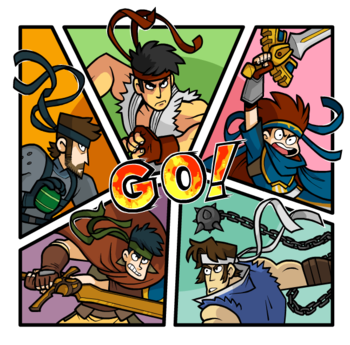 The Ultimate Showdown of Ultimate Bandanary* Image is based on Super Smash Bros. Ultimate. Clockwise from top: Ryu, Roy, Richter, Ike, and Snake.
Kaku: Do you get stronger or something if you wear that washcloth?
Zoro: Maybe.
— One Piece
Advertisement:

We all know Helmets Are Hardly Heroic, so what is a badass who likes to have their head covered supposed to wear on the battlefield? A bandana of course!

The reasons for wearing one can vary. Maybe the wearer thinks it looks cool. It can keep the wearer's hair out of their face without obscuring their vision like a helmet might. If supplies are scarce, a bandana might be the only headgear one is able to find. Whatever the reason, a bandana usually highlights just how much of a badass the wearer is, and warns others to stay out of his way.

Bandits, bikers, cowboys, and pirates tend to wear bandanas to signify them being outlaws or to reinforce their tough and gritty look. In fact, the bandana will often be worn for this exact purpose: A Lady of War would never wear a bandana, but a grizzled Lad-ette marine might. An elegant swordfighter wouldn't wear the bandana, but a rugged thief would.

Note that this does not have to be an actual bandana, and could be a do-rag or headband, which would fall under Martial Arts Headband if martial arts is involved, especially in Asian cinema. It also does not have to be worn on the head, as characters often wear bandanas around their necks.

This is frequently slapped on a Badbutt in an attempt at characterization rivaling the subtlety of Ms. Pac-Man's bow.

Related to Badass Longcoat. Both are added to a character to show they are a badass with a short visual cue, in this case, a certain type of rugged, masculine badass.

Sub-Trope of Nice Hat or Scarf Of Ass Kicking. Compare with Cool Helmet, and a Sister Trope to Fedora of Asskicking as well.