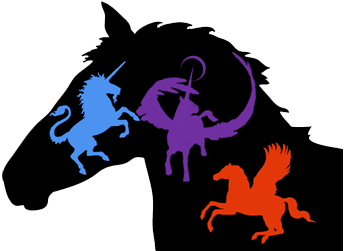 With pegasi red and unicorns blue,
They're all cool horses—plus Winged Unicorns too!
Advertisement:

Some Tropes can be broad. Some can be so broad that even a specific form of them can be Tropes by themselves.

Let's say there's a trope for "Juggling". You realize that "Scarf Juggling" and "Knife Juggling" are common too, to the point where you can think of half a dozen examples for both. Those would be Sub-Tropes, whereas "Juggling" is generally their Super-Trope. In logic terms

, "Juggling" is the genus and the different kinds of juggling are the differentia; they share the same common theme in their definition, but they each have additional features that distinguish one from another.

Heck, some tropes can be sub-tropes of more than one super-trope. This can be a shared aspect of them or actually combining the two tropes.

The definition of the super- and sub-tropes are what's important. Every example of a sub-trope will also be an example of its super-trope.

Compare/Contrast The Same, but More Specific (when a distinction is not enough to make a separate trope).