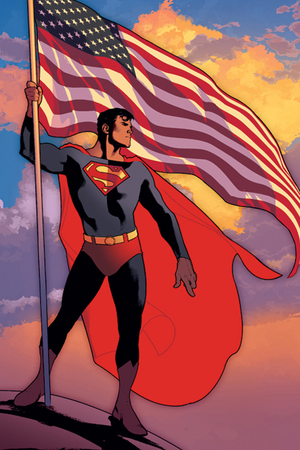 Truth, Justice, and other stuff!
"Law is order, and good law is good order."
— Aristotle
Advertisement:

The Character Alignment combining the concepts of Order and Goodness.

Lawful Good characters believe that laws exist to further the public good, and that fairness and equality before the law are necessary for good to truly exist. Order is a vital part of good, not for its own end, but because when people act arbitrarily, they will often harm each other, intentionally or unintentionally. To a lawful good character, no one is above the rules, not even themselves.

Along with order, justice is a very important concept to lawful good characters in every sense of the word. All people have to be treated justly, be it being justly rewarded for their services, punished for their ill deeds (and only to the appropriate amount), or being protected from harm. Depending on the interpretation, a Lawful Good person may weigh their mission more towards defending the weak, or more in punishing the wicked to deter future harm.

A Lawful Good character believes in the goodness inherent in all beings, in a code of conduct—be it a personal one or a set of laws—and that an ideal world comes from promoting this dualism of structure and benevolence. Differing interpretations of "good" may lead a Lawful Good character to become Lawful Stupid, as following the law to the letter, to the point where it defies basic decency and disproportionately punishes people, no longer becomes fair. A Lawful Good character typically believes that the law should serve and protect the people, and not the other way around, and that mercy should be granted to everyone, even enemies.

In most RPGs, it is compulsory for The Paladin to be Lawful Good. If they stop being Lawful Good, they run the risk of losing their powers (depending on how far they stray). Likely to take a theoretical approach to The Golden Rule, with lots of complex rules built around it to clarify how it is to be applied. Utopias tend to be composed entirely of good, honest Lawful Good citizens.

The Lawful Good alignment is often thought of as pertaining to the most blatantly good of the good guys, and is commonly stereotyped as such. Still, also Neutral Good and Chaotic Good characters can count as Incorruptible Pure Pureness. As alignments are broad categories, this is an oversimplification, but so is the opposite stereotype.

Alternatively, too much weight on the "Law" side and too little on the "Good" can easily inspire a Knight Templar, though those tend to be Lawful Evil. This leads to unceasing debates over whether these people are playing the alignment "right", or whether they should belong to one of the other lawful alignments.

While the key difference between Lawful Good and Neutral Good is the belief that upholding law/honor/social mores/etc. is required to set a proper example for others; the key difference between Lawful Good and Lawful Neutral is the recognition that laws/honor/social mores/etc. exist only to protect the Greater Good, and will consider whether those strict guidelines accomplish their tasks rather than enforcing the rule for the rule's own sake.

If you have a difficulty deciding which alignment a good-aligned character belongs to, remember that the vast majority of characters do not have one clear, constant alignment. Do not attempt to shoehorn characters into an alignment if you can't figure one out for them; if you have any doubts, they probably simply lack a clearly-defined alignment.

The main difference between Lawful Good, Neutral Good and Chaotic Good is not their devotion to good, but the methods they believe are best to promote it:

Others, such as Big Good, Good Is Not Nice, Ideal Hero, All-Loving Hero, Small Steps Hero, Knight in Sour Armor and Friend to All Living Things, can vary between Lawful Good, Neutral Good, and Chaotic Good. Generally, a lawful good government is The Republic.

Others, such as characters with Super OCD and Creature of Habit, can vary between Lawful Good, Lawful Neutral and Lawful Evil

When dealing with the examples of specific characters, remember that assigning an alignment to a character who doesn't come with one is pretty YMMV. If you've got a problem with a character being listed here, it probably belongs on the discussion page. There will be no Real Life examples under any circumstances; it just invites an Edit War. Plus, real people are far too complex and multi-dimensional to really be classified by such a straightforward alignment system.