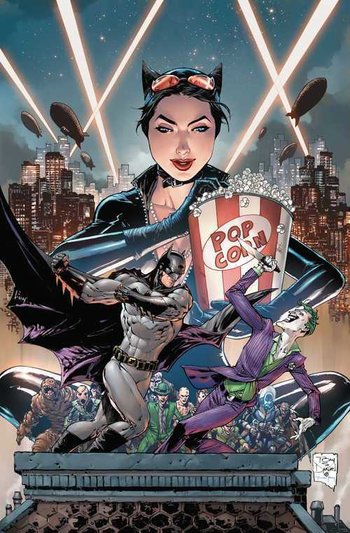 A character is Chaotic Neutral when, according to the best known Character Alignment system, they fail to qualify for either Good or Evil but fall on the Chaotic side of the Law—Chaos axis. As with all alignments, this can mean many things, several of which are described below. Some characters may abide by principles that they consider chaotic or autonomist, others may not have any major consistent principles at all (not even if the principles are considered inherently chaotic). For example, one Chaotic Neutral character might be part of a tribe that considers itself independent and anarchist, whereas another may choose not to be, as their lives may still be dependent on that tribe's principles (and as such they may not feel they are truly self-sufficient or independent after all). But then, this ultimately varies and depends on what type of Chaotic Neutral (as enlisted below) the character is portrayed as in the story. The Chaotic Neutral character may have a kind enough heart and even helps people out sometimes, but they do not feel committed to helping others and often do not think about the consequences of their actions.

Typically though, Chaotic Neutral characters do whatever the hell they like and damn the consequences (unless they're too noble or hurtful, watch out for that part)! Some say they're the ultimate free spirits, others that they're just crazy. Either way, there's no telling what they'll decide to do next — their main, and often only, concern is their own freedom. Whose side are they on? It's doubted that they even know themselves. Nobody else does. In some ways, their inherent uncertainty makes them an unknown quantity to deal with most times so they border on Jerkass in terms of their self-centered perception of the world, though they usually do have some redeeming features. Chaotic Neutrals detest the self-righteous and believe in power to the individual. These characters are also useful in any story that involves something that isn't damnably black and white in the outcomes.

Chaotic Neutral comes in a variety of flavours:

Chaotic Neutral is both an easy and difficult alignment to play as. Easy, because its chaos and neutrality allows a player to do what they please, and hard because you really have to be careful about not annoying people when you can do whatever you want. Many players of Chaotic Neutral also have a tendency to end up in Good groups, playing Chaotic Good characters and doing things that are generally good, not just selfish — maybe feeling the need to Kick the Dog occasionally (even arbitrarily) for the purposes of a Character Check, to "neutralise" their Karma Meter. Many poor players also confuse Chaotic Neutral with "batshit crazy": a Chaotic Neutral character is not equally likely to jump off a bridge as he is to cross it, that would rather be Chaotic Stupid, and a competent Chaotic Neutral generally tries to avert being just that — although a player choosing to jump off a bridge is probably not all that interested in participating, anyway. Likewise, Chaotic Neutral characters typically won't stick their necks out for strangers or business partners unless the risk carries a suitable reward, but they might still fight and even die to defend close friends or loved ones.

In Tabletop Games, Chaotic Neutral is often the choice of players who want to do bad things when the GM forbids playing evil characters, perhaps breaking up the party, abandoning trusted companions to die, or killing Player Characters for the hell of it. (Protip: Killing someone or generally causing dissent "for the hell of it" is Chaotic Evil). The "chaotic" part of their personality is less about being "LOL so random!" and more about a strong dislike for tradition, order, routine, and laws.

If you have difficulty deciding which alignment a neutral-aligned character belongs to, the main difference between Lawful Neutral, True Neutral, and Chaotic Neutral is not their lack of devotion to either good or evil, but the methods they believe are best to show it: