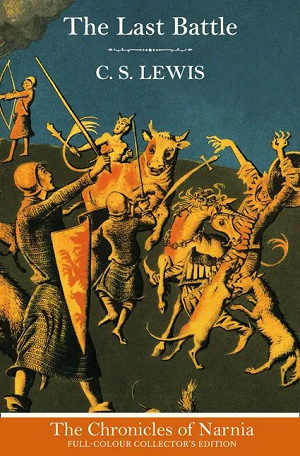 "All their life in this world and all their adventures had only been the cover and the title page: now at last they were beginning Chapter One of the Great Story which no one on earth has read: which goes on for ever: in which every chapter is better than the one before."
Advertisement:

The seventh and final installment in The Chronicles of Narnia and the seventh book chronologically. Over a year (on Earth) after the events of The Silver Chair, Jill and Eustace are summoned back for one last adventure, to aid the current King of Narnia against the treachery of the ape, Shift, and his quasi-Arabian Calormene allies.