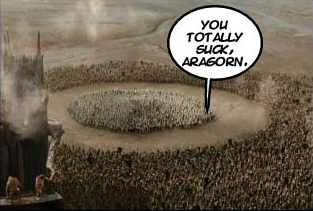 And yes, they already tried parley

.
"It is magnificent, but it is not war. It is madness."
— Pierre Bosquet, regarding the Charge of the Light Brigade

Let's face it: most writers are not exactly the world's greatest tactical geniuses, so whenever a war's going on, expect a lot of dumb decisions from tacticians. To pour salt into the wound, these tacticians are sometimes explicitly said to be tactical masterminds. Such tactical blunders and bad ideas include:

This is often used to add drama to the story. After all, a story about an army performing a last-ditch attack against a superior foe is more dramatic than the same army slaughtering the other one because it forgot to defend its flanks. Alternately, it could just be because it looks cool. On the flipside, artillery barrages, Gunship Rescues, the mechanical speed and precision of a Cold Sniper blowing heads apart all have a macabre beauty if you're an observer, not a receiver. Furthermore, an Enemy that can defeat a Badass Army acting competently and using its advantages to the fullest comes across as much more dangerous and respectable than one that Curb Stomps a bunch of barely-trained, poorly-equipped conscripts.

Some critics see Hollywood Tactics as evidence of evil "Hollywood's politics" insisting that the military is always bad/wrong/evil. The concurrent claim that they tend "to be averted in the works of writers who actually served in the military, or even have significant military experience, including (among others) John Ringo, David Drake, Tom Clancy, and Robert A. Heinlein", which however sees these authors' pro-military if not militaristic bent as more important than their actual military experience (Heinlein served five years in the peacetime U. S. Navy before having to retire due to tuberculosis, Clancy did not serve at all due to bad eyesight). It should be noted, that military experience does not guarantee immunity from proposing terrible tactics and strategies, as for instance a lot of the literature produced about "the coming war" by retired and active military men before World War I demonstrates. And in real life even the best generals can use self-defeating tactics on an off day, even Robert E. Lee had his Pickett's Charge.

Sister Trope to Standard Hollywood Strafing Procedure. Supertrope of Onrushing Army. When played for laughs, this is General Failure.