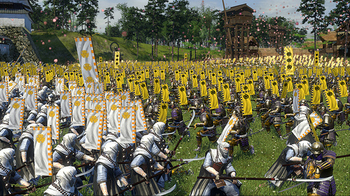 "CHAAAAAAAAARGE!!!"
" A line of dust floats at the base of the Red Mountains. A thin brown line, growing larger and larger. Specks appear in the haze. A noise rises up, like a hundred roaring engines. A thousand thundering hooves. Ten thousand uplifted voices. Thread's eyes widen. "Form Up!" he screams. "Form up!" But it's too late. The Anasazi have come. They come on foot, they come on mules, they come on horses, they come in vehicles older than the Dark Days. They come with homemade slingshots and stolen firearms. They come in a ramshackle cavalry charge that whips the desert into a sandstorm. At the center of the charge is a old, battered truck. On the roof of the cab stands the Victor, grey hair whipping in the wind, nightgown flapping against her bony legs, a pitchfork in one hand and a pistol in the other, shrieking a war cry that reaches the eagles in the sky."
— Arrow, a sequel to The Victors Project
Advertisement:

A popular subset of Hollywood Tactics. Opposing armies will not engage in tactics or maneuvers of any kind. Instead, they simply form up into two opposing masses and charge straight at each other across a flat field. Afterwards, even this rudimentary formation will be lost as soldiers break up into a series of individual duels. If there are any cavalry, they will not work as a separate unit or form up together; rather they will just be scattered in amongst the infantry.

If one side doesn't charge, they will hold their fire until the very last moment. Or they will fire exactly one volley of arrows before charging themselves.

Before firearms this tactic was rare, the "Shield Wall" being a much more common tactic. Even ancient barbarians generally knew better than to just gang up and run toward the enemy. Actually the advent of firearms temporarily increased the use of this tactic, the goal being to close within melee range before the enemy could fire a second volley (this tactic being used by Scottish Highlanders). However even then soldiers still maintained formation rather than charging in a formless mass. However ever increasing range, accuracy, and speed of firearms finally rendered this tactic suicidal in the First World War. A casual glance at the mortality figures of World War I (~9 million) will show you how well it worked against advanced firearms.

Realism aside, this trope makes for a useful and iconic image for filmmakers, and is popular in an introductory scene as a way to quickly tell the audience that these two large groups of people really, really don't like each other. Compare Animal Stampede, where the charging troop consists of mindless animals rather than soldiers. A subtrope of Call That a Formation?