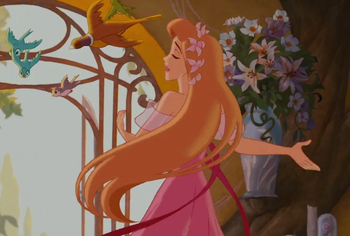 "My ally from 1 is dazzling, an explosion of flowers woven into her hair and a wispy white dress clinging to her curves. She doesn't need to play up the coy, seductive siren the audience loves, they only need look at her."
— Enobaria, The Bonds of Blood
Advertisement:

Flowers have been associated with femininity since ancient times. In fiction, flowers are often used to symbolize a character's gentle or docile nature. This is often done by having the flower be used as some form of Signature Headgear or by having the flowers be a recurring motif.

The flexible symbolism of flowers can symbolize a number of types of femininity within The Three Faces of Eve. Flowers can symbolize elegance, nurturing, and caregiving (The Wife), sensuality, romance, and beauty (The Seductress), or new life and innocence (The Child).

May overlap with Pink Means Feminine and Long Hair Is Feminine, particularly when the flowers are worn in the hair. Compare Water Is Womanly which uses another element of nature to symbolize femininity.

Supertrope to Cherry Blossom Girl. May also overlap with Caring Gardener, Flowers of Nature, Sunny Sunflower Disposition, and Something About a Rose. Subtrope of Floral Motifs, Women Are Delicate (since they are compared to a small, delicate flower), and Delicate Is Beautiful. See also Tertiary Sexual Characteristics, Queer Flowers, and Flowers of Romance.