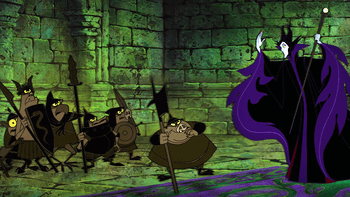 As brainless as they are servile.
"They may be called the Palace Guard, the City Guard, or the Patrol. Whatever the name, their purpose in any work of heroic fantasy is identical: it is, round about Chapter Three (or ten minutes into the film) to rush into the room, attack the hero one at a time, and be slaughtered. No one ever asks them if they wanted to."
— Terry Pratchett, Guards! Guards!
Advertisement:

A slang term for the hordes of standard-issue, disposable bad guys whom The Hero mows down with utter impunity and complete disregard. Deadly, competent, loyal, abundant... pick any two.

Also called "baddies", "goons", "scrubs", "drones", "small fry", "flunkies", "pawns", "toadies", "grunts", "minions", "lackeys", "underlings", "swarmers", "henchpersons", "popcorn enemies", "foot soldiers" and "Cannon Fodder". In Japanese videogame jargon, they're known as "zako" or "small fry". The actual term "mook" presumably comes from Hong Kong Cinema, and takes its name from the mook jong, the wooden training dummies used in Wing Chun, whose only function is to get hit. In Hong Kong movie circles, they're often called "three-hit men," in reference to how many hits it takes to put them down, though the actual number of hits varies.

It's a thankless job, to be sure, but somebody's gotta do it. Enter the humble mook.

Mooks play an important role, as without someone to fight on a constant basis, an action movie/show/game would have a lot less action. If every single minion your hero ever runs into has a personality, then the pacing of the show would slow to a crawl and Quirky Miniboss Squad, The Dragon, and the Big Bad would not feel as unique in comparison. Thus, mooks serve as Filler and a backdrop to the truly climactic moments of an action franchise while also ensuring that in-between things are kept lively. In Video Games, they may also double as a ready source of Experience Points, gold, and recovery items for the player.

In addition to accentuating the real villains, mooks also help establish the heroes, especially their combat skills, as their lack of an identity allows them to be beaten, mauled, shot or otherwise disposed of in creative ways without guilt. The Hero might find it in his heart to Save the Villain, forgive him, even accept him into his inner circle, but the guys whose only crime is not finding a better employer will be shown no mercy (although exceptions apply). Next to Punch-Clock Villain, but usually more faceless, this is one of the tropes most liable to Just Following Orders, a fact that may be pointed up in order to reduce their disposability.

It's rarely explained just why they're willing to fight and die for villains who want to destroy the world, or what they get in return. Their life expectancy is on a level with that of the average mayfly, and you have to wonder why they took the job in the first place, especially if master is abusing them as much if not more than the heroes. Depending on just who/what they are fighting for, the plausibility of this can vary.

Being Acceptable Targets by definition, sometimes mooks serve as (or devolve into) outright comic relief rather than an actual menace by being dimwitted, ineffective, clumsy, a genuine danger to themselves or just plain unlucky. Despite all this, some may get their own moments in the spotlight or become genuine villains in their own right.

Except where noted in some of the subcategories, it is generally considered "bad form" for mooks to be given any sort of detailed backstory or personality (beyond broad strokes). Put another way, for the purposes of heroes continuing to be seen as heroes, and to avoid a major mood swing, mooks generally have no girl/boyfriends, children, parents, grandparents; they don't belong to church groups or non-profits that might miss them; they don't spend part of their day looking forward to what's on TV tonight (never to see the show because they're about to die), and they generally die quick, semi-painless deaths (blood and gore optional). Mooks are rarely female, and if they are, they generally don't fall into the "gorgeous" category because you don't want the viewer/reader to become attached to a character the hero is about to kill (The Spy Who Loved Me is a noted example where this rule is broken, and 35 years later James Bond fans still criticize the decision to have Bond murder Caroline Munro's helicopter-flying babe, though more in the They Wasted a Perfectly Good Character sense). There are, of course, exceptions, either to make a Mood Whiplash and ponder about the nature of violence, establish the protagonist as a ruthless Anti-Hero, or briefly acknowledge that the mooks have lives and personal affairs but they're so trite and cliche that they deserve no sympathy anyway.

Not to be mistaken with a portmanteau of "magazine" and "book" intended for a longer term of publication between editions, a certain racial slur, or the tentacled aliens from the Mother series (They technically qualify as this, but they’re more fitting as Degraded Boss instead, as they’re the "common" form of one of the preceding bosses encountered), or the purple bird-like creature from Princess Comet (although he is also a Mook in this sense).

This trope is the Evil Counterpart of the Redshirt Army, which are Mooks on the good side (and thus are where to go when searching for easily-killed good guys). Similar to but not to be confused with their non-combat brother Evil Minions (likewise the Redshirt Army with the Red Shirt). Occasionally, it turns out they were Not Always Evil. If a "character" who would otherwise qualify as a Mook is disqualified because he's apparently acting on his own, you have Bit Part Bad Guys.

In Video Games, mooks tend to be slightly more powerful, and able to at least hurt the hero, if not kill him a few times. However, 9 times out of 10, the hero has a Healing Factor (more often objects used to heal than spontaneous healing) while the mooks stay hurt forever. Also, while the hero can restart if he/she dies, the mooks (usually) only die once per level, and when the level is restarted, they usually do the exact same thing they did before.

If they're lucky, mooks may very occasionally get promoted to the status of a more major villain. The heroes may also be able to persuade them over to the good side, in which case they have performed a Mook–Face Turn. Humanizing mooks is a basic technique of Deconstruction. In some Video Games, certain kinds of mooks will have a special introduction when they appear for the first time.

Armies of mooks are not always but usually overwhelmingly male. Typically, killing or harming even one nameless female tends to twist an audience's sympathies differently than the effect of the same to a male. As your protagonist escapes the fortress of doom, you don't want the audience worrying about the mooks being taken out or hurt. In video games however, all-male mook armies are usually there for an entirely pragmatic reason, since including random female enemies would be requiring constructing entirely new character models for characters the player won't interact with outside of killing them.

If the mooks also provide romantic services, this may overlap with Paid Harem.

When supposedly elite fighters in large number are less competent together than a man alone, it's Conservation of Ninjutsu.

Go forth and vanquish the army of Mooks below:

Troopers are meant to be the first agents to enter unknown AWEs, Thresholds, or any other paranaturally hazardous situation. They are heavily armored and heavily armed in preparation for the worst.

Troopers are meant to be the first agents to enter unknown AWEs, Thresholds, or any other paranaturally hazardous situation. They are heavily armored and heavily armed in preparation for the worst.