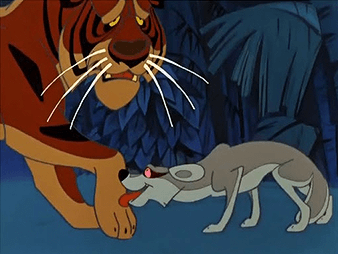 Now you're just embarassing your boss. note Shere Khan and Tabaqui the Jackal in Adventures of Mowgli, award-winning Soviet adaptation of The Jungle Book.
Cruella De Vil: What kind of sycophant are you?
Frederick: I, uh... what kind of sycophant would you like me to be?
— 101 Dalmatians (1996)
Advertisement:

A worshipful, perfectly willing slave of the Big Bad. Generally he's of only marginal usefulness, due to his incompetence and/or obsessions — or due to his fear of the boss' ire robbing him of all initiative.

An example of Happiness in Slavery; The Igor is a variation of this. If the Big Bad is a vampire and he's "promised" the same fate to his loyal servant, may overlap with Vampire Vannabe and The Renfield. More generally, liable to a Pretender Diss both from those they (hope to) serve and their enemies. See also Dirty Coward (for reasons why someone would become this trope)

Contrast with the Battle Butler and Yes-Man. Sometimes overlaps with Crusty Caretaker and Professional Butt-Kisser, though the latter is in it only in order to look out for his own status while the sycophant has a genuine amount of admiration and adoration for his boss. If the character endures endless abuse at the hands of their master, then they're a Bumbling Sidekick. May overlap with Vile Villain, Laughable Lackey if their boss is a noticeably more serious villain. Just about the polar opposite of The Starscream, although it's not uncommon for The Starscream to pretend to be this trope. See also Transhuman Treachery.

The Prosecuting Zircon tries sucking up to Yellow Diamond. Yellow doesn't appreciate it.

The Prosecuting Zircon tries sucking up to Yellow Diamond. Yellow doesn't appreciate it.