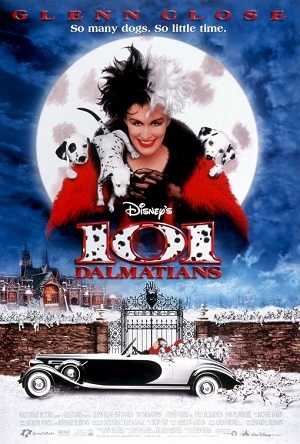 A Disney Live-Action Remake, eighteen years before it was cool.
Advertisement:

101 Dalmatians is a 1996 live-action adaptation of Disney's 101 Dalmatians, starring Glenn Close as Cruella de Vil, Jeff Daniels as Roger Dearly, Joely Richardson as Anita Campbell-Green-Dearly, Hugh Laurie as Jasper and Mark Williams as Horace. The story is updated to the (then-) Present Day (thus, The '90s), and the animal characters don't speak this time. It was written and produced by John Hughes and directed by Stephen Herek.

See also Cruella, an origin story film about the eponymous character, played by Emma Stone, produced by Glenn Close herself.

Cruella de Vil cracks herself up.

Alternative Title(s): One Hundred And One Dalmatians

Cruella de Vil cracks herself up.