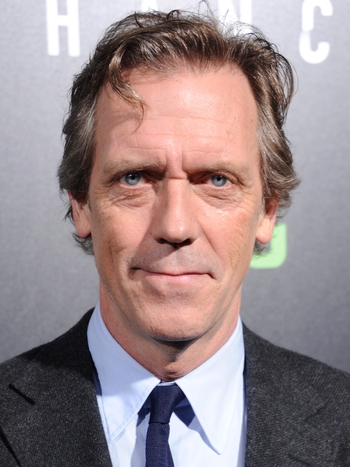 "I would cling to unhappiness because it was a known, familiar state. When I was happier, it was because I knew I was on my way back to misery. I've never been convinced that happiness is the object of the game. I'm wary of happiness."
— Hugh Laurie
Advertisement:

He first reached fame as a cast member of Blackadder (particularly in season three and four, also known as Blackadder the Thirdnote where it takes place during Regency-era Britain and Blackadder Goes Fourthnote where it takes place during World War I) and then as one half of Fry and Laurie in A Bit of Fry and Laurie. He also played Bertie Wooster in Jeeves and Wooster. Between 2004 and 2012, he starred as Dr. Gregory House in the show of the same name. He has since starred in a number of other American movies, including Street Kings and recently made a return to television with the Hulu series Chance and the HBO series Avenue 5, and the British series Roadkill.

He's also an accomplished author, his book The Gun Seller being praised by critics. And on top of that, he's a multitalented musician, having released two well-received blues albums (and performing numbers as The Cast Showoff on many of his series) featuring his skills on vocals, piano, guitar, drums, harmonica, and saxophone. And before he started his entertainment career, he was a high-level rower at the University of Cambridge, rowing on the Cambridge boat that lost The Boat Race against rival Oxford in 1980.

He has also done voice-acting, as Dr. Cockroach in Monsters vs. Aliens and some of its spinoff shorts, Steve in Arthur Christmas, E.B.'s Dad in Hop, Owl in Brown Bears Wedding, Squire Trelawney in The Legends of Treasure Island, Johnny Town-Mouse in The World of Peter Rabbit and Friends, Newton in LittleBigPlanet 3 and Archie in Second Star To The Left

This leads to a strange dichotomy in his perception. To British audiences he is the comedic master of The Pratfall, the over-done and over-silly counterbalance to the more reserved Stephen Fry or Rowan Atkinson... but, to Americans, he is best known as the stern and cynical Dr. House. In fact—perhaps due to his uncannily flawless American accent—some Americans are surprised to learn that he's British. Including the casting director that hired him for the role, who was in fact hoping to avoid casting a Brit doing an accent.

To some, he is a mixture of both, a man of legend perceived to be able to switch from cold and merciless to the most lovable man on earth in a single sentence.

But wherever in the Anglosphere or indeed the world we are, he's still Hugh Laurie.

Edmund correctly surmises that Prince Ludwig was bullied as a child.

Edmund correctly surmises that Prince Ludwig was bullied as a child.