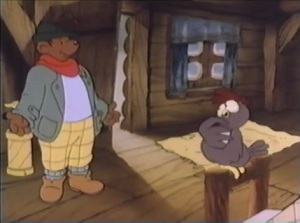 Brown Bear's Wedding is an animated short film (22 minutes, 39 seconds all told), made in 1991, based on the story Le Mariage d'Ours Brun et d'Ourse Blanche. It stars Joss Ackland and Helena Bonham Carter.

You can view both