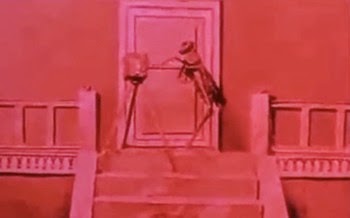 Love among the bugs.
Advertisement:

The Cameraman's Revenge (Mest' kinematograficheskogo operatora) is a 1912 animated short film from Russia — specifically, Tsarist Russia — made and directed by Ladislas Starevich. In this film, Mr. and Mrs. Zhukov are a married couple who have grown bored with each other. Mr. Zhukov is carrying on an affair with a nightclub dancer. One night he goes to the nightclub, and after beating up the dancer's boyfriend, Mr. Zhukov takes her to a hotel for some sex. Unfortunately for Mr. Zhukov, the dancer's boyfriend is a film cameraman and projectionist, who follows Mr. Zhukov and the dancer and films their tryst.

Meanwhile, Mrs. Zhukov is also cheating, with an artist. Mr. Zhukov comes home, finds his wife in the arms of the artist, flies into a rage, and throws the artist out of the house. Mr. Zhukov forgives his wife, who doesn't know that he was also having an affair, and takes her to the movies. Unfortunately for him it's the movie theater that the cameraman works at, and the cameraman seizes this opportunity to have his revenge. He plays the film, humiliating the Zhukovs and causing Mrs. Zhukov to beat her husband over the head with her umbrella. Mr. Zhukov charges into the projectionist's booth and tackles the projectionist, upsetting the camera and starting a fire. The film ends with the Zhukovs reconciling with each other—inside their shared prison cell.

Also worth noting: The Zhukovs and the artist are beetles. The dancer is a dragonfly. And the cameraman is a grasshopper. The Cameraman's Revenge is in fact one of the earliest examples of Stop Motion animationnote oldest surviving intact, if you don't count the recent restoration of The Beautiful Lucanida, also by Starevich, with Starevich being a pioneer of the form. Starevich took dead bugs, attached wires to their limbs, and sealed the limbs to the bugs with sealing wax, thereby creating incredibly convincing, realistic-looking puppets to use in his animated films. The effect was so convincing that some people at the time believed that Starevich had trained live bugs to perform.

After Red October, Starevich moved to France, where he worked in animation for nearly fifty years before his death in 1965 at age 82.

The short is available online on many sites, including YouTube

The Cameraman's Revenge provides examples of: