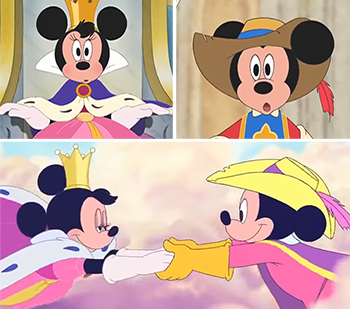 "Today I saw you and spoke to you for the first time.
It was like an earthquake; everything in me was overturned, the graves of my heart were opened and my own nature was strange to me.
I am forty, and I believed I had reached the autumn of life.
I had wandered far, known much and lived many lives. The Lord had spoken to me, manifesting Himself in many ways; to me angels had revealed themselves and I had not believed them. But when I saw you I was compelled to believe, because of the miracle that happened to me."
— John Angelos, The Dark Angel by Mika Waltari
Advertisement:

Love at First Sight. It's a staple of Fairy Tales, love songs, and the Disney Animated Canon. Two characters meet, and fall deeply, madly, passionately in love with each other immediately. This is one of the most common and oldest story archetypes.

Depending on where a story falls in the Sliding Scale of Idealism Versus Cynicism, Love at First Sight is either a recipe for Happily Ever After or eventual disillusionment and heartbreak. Of course, even if the characters really are perfect for each other, they can still be Star-Crossed Lovers who are destined to be apart, or simply can start a relationship based on this trope and develop it into a deeper and more sincere one.

Note that this trope is compatible with Oblivious to Love. In a Love Epiphany, it can suddenly dawn on the character that he is in love and has been for some time, from their first meeting.

Compare Chic And Awe, Fourth Date Marriage, The Dulcinea Effect, and the vocal equivalent Love at First Note. The Serial Romeo is a character who falls into this over and over again. Engaging Conversation happens when two acquaintances hit it off and one jokingly proposes marriage. The opposite is Hate at First Sight.

Not to be confused with the manhwa, the Harry Potter fanfic, the Once Upon a Time fanfic, or the kinetic novel with the same name, or the Chinese drama Love At First Fight.

While the Dalmatian family are vacationing in Cornwall, Dolly falls in love instantly with Spike the lifedog.

While the Dalmatian family are vacationing in Cornwall, Dolly falls in love instantly with Spike the lifedog.