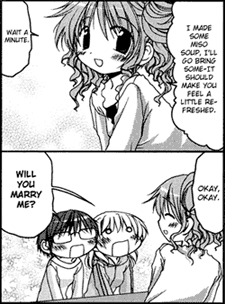 "Sae (left) said it while sober"
Gabrielle: Breakfast is served. Get em' [while] they're hot!
Victor Lang: Marry me?
Gabrielle: They're only toaster waffles.
— Desperate Housewives, "God, That's Good"
Advertisement:

So you meet a member of your preferred gender for the first time and initiate a conversation. They might be a coworker, a friend of a friend, or even a stranger you're meeting in a trendy juice bar: in any case, it's a casual, low-key meeting. Things are going along smoothly when suddenly, in describing oneself, your new acquaintance says "I spend six hours a day editing TV Tropes."

You can hardly believe your ears: you spend seven hours a day on TV Tropes! After being told by your friends (both of them) that you have a problem, at last, you've found a kindred spirit! How do you express your glee at your mutual interests?

You ask them to marry you, right then and there.

Of course, you don't mean it. It's an exaggeration for comedic effect. In other words, you're only joking. In fact, if you feel compelled to say this right away upon meeting someone, you both are much more likely to become Platonic Life-Partners: tossing love and sex into the mix would overcomplicate what would otherwise be a close (and maybe occasionally sexy) friendship.

Or you do mean it and you're even more pathetic than either of your friends realized.

"I want to have your babies" is a frequent variation of the trope - preferably said by a man to a woman for extra silliness.

For this trope without the commitment, see Geeky Turn-On. If you actually do intend the proposal, it might lead to a Fourth-Date Marriage or at least be Love at First Sight.