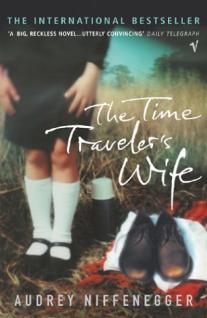 Once upon many times, there was a librarian named Henry. At the age of 5, Henry developed Chrono Displacement Disorder. At any time, usually when under extreme stress, he can and will disappear and reappear at any time, mostly within his lifetime. He can't ever change anything in the past and he knows something very bad happens to him in his forties. He's had to learn how to fight, pick locks, and steal for every time he's thrown somewhere, as he is basically helpless, unarmed, and naked wherever he arrives. Anything that isn't truly part of him stays behind, to the extent he had to have a tooth pulled just because he kept losing the filling. Sometimes he ends up getting to live through the same traumatic situations in his life over and over and over and over again.

Those are the disadvantages.

The advantage is that during his 30s, Henry began to time-travel into the childhood of his wife, Clare, from ages 6 to 18. She grew to love him during these trips. And so, by the time they actually meet in real time when he's 28 and she's 20, she has known him all her life and knows that she ends up marrying him. Meanwhile, Henry is initially surprised and confused, having never met her before, but soon he falls for her like she did for him, and they begin dating, eventually getting married. Not long after, they try to have a child, which makes things even more complicated.

A science fiction novel by Audrey Niffenegger, it explores all the complexities of its fantastic premise and its effects on otherwise perfectly ordinary people — and you will not find it in the science fiction section of your library. (More often than not, it'll be stuck in general fiction — or in the Romance section, effectively trading one Genre Ghetto for another.) It is highly recommended but it comes with a serious Tear Jerker warning.

The book has gone on to influence many Science Fiction authors, most notably Steven Moffat, who for a time was the lead writer of Doctor Who, and created characters with a similar premise.

A film adaptation was released in 2009, starring Rachel McAdams as Clare and Eric Bana as Henry. A live-action series, written by the aforementioned Moffat

and starring Theo James and Rose Leslie, will be released in 2022 on HBO Max.