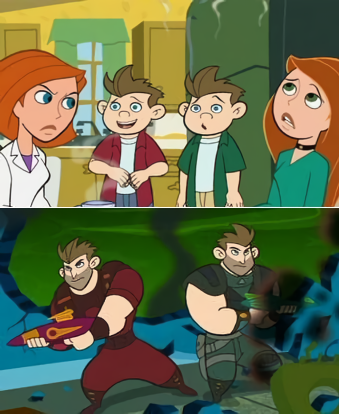 Why is everybody in the future so ripped?!
"So never kick a dog because it's just a pup —
You'd better run for cover when the pup grows up!"
— Les Misérables, "Little People"
Advertisement:

The Bad Future has happened, meaning the Evil Overlord has won, it's The End of the World as We Know It and they are unquestionably in charge and making questionable fashion choices. There is hope in this bleak Dystopia however; some brave people have formed La Résistance.

Notably, these include most of the former Sidekicks, the Plucky Comic Relief, and even The Scrappy, with an occasional "main" character survivor; basically everyone you'd expect to be a loser in the future. But they're not the same characters we knew and loved (or hated), they're Darker and Edgier.

It seems living under an iron fisted despot is a great personal motivator to get buff, and all those bombed out HotTopic stores are just begging to be used by actual punk freedom fighters. Effectively everyone's gotten a badass Makeover and turned into fashionably scarred, goatee-sporting, longcoat-wearing, Shell Shocked Veterans and Genius Bruisers. Eyepatches are popular too.

Even the mousiest, ditzyiest, flabbiest, slacker-iest characters straighten out and become deadly serious professionals. Even if we grow to like these new interpretations of the same characters more than the originals, the status quo and attachment for the originals is sure to undo this harsh future.

At the very least it becomes somewhat ominous to know that, under the right (or wrong) circumstances the lovable Woobie or Goofball can become a cold killing machine. They might make a future reappearance (if the future gets unfixed again) or return in the much more disturbing event that the character suffers a Heroic BSoD, or worse, gets pushed too far.

If they're lucky, the reappearance of the hero can set things right before the Big Bad is too entrenched to be removed. In some cases it can be All Just a Dream, a Time Travel made Alternate Universe, or a Mirror Universe with a tiny difference.

A subtrope of Future Foil and Took a Level in Badass. See also Future Me Scares Me, Bad Future and Alternate Universe Reed Richards Is Awesome. Compare with Ridiculously Successful Future Self.

Alternative Title(s): Future Me Is Awesome