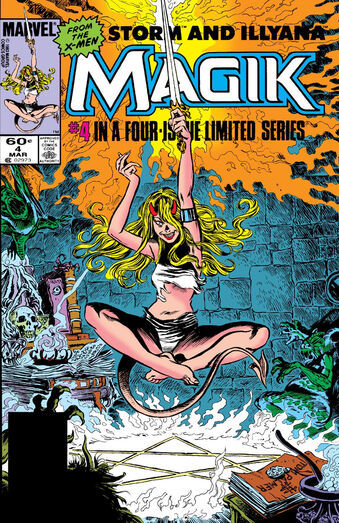 So... is this the little girl that needed Colossus to save her from a mere tractor?
Advertisement:

Magik(technically titled in the indicia Magik: Illyana and Storm even though the covers displayed Storm and Illyana: Magik) was a 1984 Marvel four-issue limited series, featuring Magik (sister of the X-Man Colossus). It was written, as with pretty much everything X-Men at the time, by Chris Claremont.

During X-Men #160, the team was trapped in Another Dimension ruled by the dark lord Belasco. When the team managed to escape at the end of the story, Belasco and Kitty waged a tug-of-war over Illyana. Kitty lost her for a second but got her back and pulled her through, only to be faced with a teenager. For the X-Men it was a moment, for Illyana it was seven years.

The limited series tells what happened in those years. Because of a time travel paradox, there was a second group of X-Men in that dimension who got trapped while their Illyana was saved. Storm, now an old woman, became a sorcerer, and helped the newly arrived X-Men (including her younger self) to return to Earth, but could not prevent Belasco from getting Illyana and making the first of five power stones that would allow Belasco's gods to break the dimensional barriers. Storm was easily defeated, and then rescued by "Cat" (Kitty Pryde, with feline traits added by Belasco). They take her to Storm's garden, who wanted Illyana to be her apprentice, but Cat offers to teach her how to use a sword and fight physically, without magic. In Belasco's castle Cat kills Nightcrawler, Belasco's servant, but fails to kill Belasco himself. He changes her even more, turning her into a complete cat, with an animal mind, and Illyana accepts Belasco's guidance, becoming his apprentice.

Some time later, Illyana's mutant power awakens: she can control the teleporting discs that are all around limbo. But, initially, she can not control the destination, which could be anywhere and anytime. She falls into limbo's past and sees an old battle of Belasco and Storm: she kills him and becomes a demon like him. The "Belasco" she killed turned out to be an illusion by the sorcerer, but the intent was still there and Storm was corrupted all the same (it would take her several years, up to her old age, to be good again). Another disc, and Illyana returns to the castle. There, Storm fights again against Belasco, but Cat kills her. Illyana kills Cat, and foils Belasco's plan with the dying Storm. This time she could summon a teleporting disc at will, and take Storm's corpse to her garden, to bury her. But then, it becomes cold and the plants begin to die: it was a magic garden, and without Storm to maintain it, it is left to become one with the rest of Limbo. To punish her, Belasco removes Illyana's power over the discs, and leaves her in the wild, alone. She tries, on her own, to repeat Storm's magical feats, but fails each time. Then, she changes her mind: rather than life, she tries to create a weapon. She returns to Belasco's castle and began to fight him; during the fight she becomes red, with horns and a demonic tail, while Belasco turns human again.

And then, she realizes that she's about to become like him. She throws away the sword, and refuses to go on fighting. Neither one being a demon anymore, Belasco leaves limbo, and Illyana does as well. At that point, she reunites with the X-Men, in the scene described at the begining.