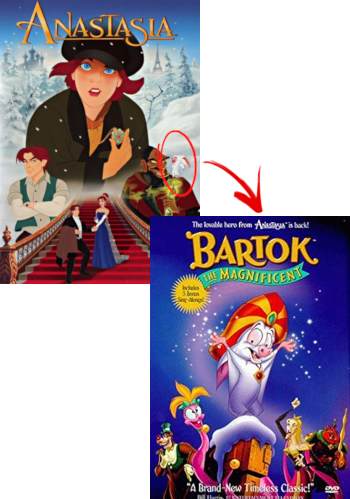 At least the forced perspective necessary to pull off this shot is magnificent.
Q: Do I know you?
O'Brien: O'Brien. From the Enterprise.
Q: The Enterprise...? Ah yes! Weren't you one of the little people?
— Star Trek: Deep Space Nine, "Q-Less"
Advertisement:

A minor character who is given a greatly expanded role in the later part of the series, a new adaptation of a story, or in the Expanded Universe.

This often arises simply due to the creators realizing that said character holds far more story potential than they originally thought, or at the very least, re-purposing this character for a greater role in the narrative is better than making an entirely new character. Of course, if this is an adaptation of an ongoing work, the character may have only been given this status to fill time, and won't be allowed to have a huge effect on the plot depending on how much the writer is trying to follow the source material; this can lead to some bizarre incongruities in planning (e.g. Overtook the Manga, Restricted Expanded Universe). And in some cases, a minor character becomes an Ascended Extra solely because the writers want a Sacrificial Lion, but aren't willing to use characters they care about for the role, though the audience might.

This can occur as a series goes on for long periods of time and is useful for filler; as it gets harder and harder to come up with meaningful new stories for the main cast, creators may find themselves looking at their supporting cast for ideas (assuming they don't decide to make a new character for this purpose, that is). Be warned however that this character might be more liked by the fandom than the writers, who may have no compunction with getting rid of them when convenient.

If a series involves a Time Skip between seasons or story arcs (or if time travel involves someone taking The Slow Path), this can happen when a character who was a child in the first part grows up enough to have an impact on the plot.

This also happens somewhat regularly in Fan Fiction, often when writers feel a character has potential that wasn't fully exploited in the original source. See also O.C. Stand-in, They Wasted a Perfectly Good Character, and A Day in the Limelight.

Compare the Breakout Character, where a supporting character gains a fandom that rivals or exceeds the main characters and thus becomes more prominent in canon. Compare also the Ensemble Dark Horse where in a similar fashion, a supporting character role remains the same but that character receives more fans. See Breakout Villain specifically for when a would-be one-shot villain ascends to Big Bad status, either through Ascended Extra or Breakout Character. A One-Scene Wonder is not an Ascended Extra, at least officially; fanfic, on the other hand...

See Mauve Shirt for when a member of the Redshirt Army gets his own name and minor characterization, but still doesn't become more than a minor supporting character in any way. For the villain equivalent, see Mook Promotion. The inverse of this trope is Demoted to Extra. Retroactive Recognition is when this happens in Real Life. O.C. Stand-in is when this happens in a fanfic.

Compare Red Herring Shirt, only the ascension is intended from the beginning, and Ensemble Dark Horse, where fans become fascinated by a character who canonically has only a very small role, at least initially.

When something similar happens to a side story rather than a side character, it is Resolved Noodle Incident or What Could Have Been.