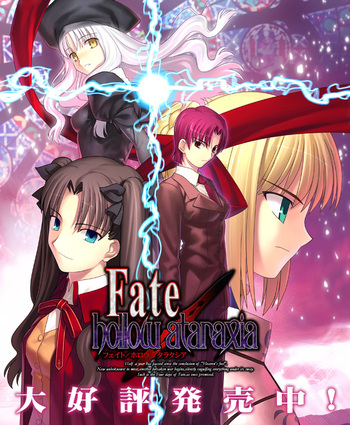 Fate/hollow ataraxia is the fandisc pseudo-sequel to Fate/stay night and one of numerous works that take place in the Nasuverse. It is based on an unusual version of events: The Grail War has ended, Kotomine and Gilgamesh have been defeated and all is well. Only... all the Servants are still around and everyone seems to be alive. Well, okay, reasonable enough if you can't follow just one ending. But it's not that simple: Apparently thanks to Tohsaka's attempts to create a magical item based on dimensional hopping, all the different continuities have been mingled including ones we never saw. So what really happened and what's going on?

And that's not all there is to it. While Shirou and the Servants and Masters are leading their oddly domestic lives together, something darker is going on. Strange beasts are spotted and an unfamiliar magus appears to have restarted the Heavens Feel. That said, none of the Servants seem to actually care since they've settled into their new lives. Yet while this is going on, time seems to be looping in an odd manner, lasting four days before the world resets back to the first day with no apparent sign of any continuity between cycles.

On top of all that, no one seems to have informed Bazett Fraga McRemitz that the Fifth Grail War ended six months ago. She's not really sure why, but rather than the Servant she intended to summon she seems to have ended up with someone... darker. Meet the eighth Servant whose identity was only hinted at in the first installment: Avenger, the Spirit of Vengeance. Avenger seems completely psychopathic but utterly weak... but is that really all there is to it?

After years in Development Hell, a finalized and complete Fan Translation was finally released in November 2014. Please do not add details that relate to Fate/stay night and reserve this page for those dealing only with this story.

An Updated Re-release was also released in Japan in November 2014 for the PlayStation Vita, with anime cutscenes done by ufotable and full voice acting. The unlockable minigames in the original were also given an update, as well as the addition of a full-fledged Tower Defense/spoof game titled Capsule Servant.