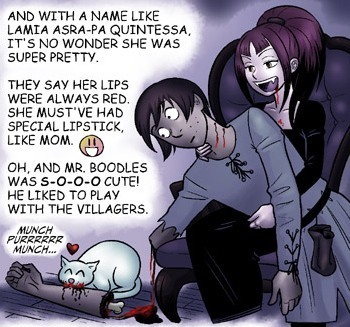 "He [Jenny's father] was a very loving man. He was always kissin' and touchin' her and her sisters. (...) God is mysterious. He didn't turn Jenny into a bird that day [as she had requested]. Instead, he had the police say that Jenny didn't have to stay in that house no more. She went to live with her grandma.(...) Some nights, Jenny sneaked out and come on over to my house, just 'cause she said she was scared. Scared of what? I don't know, but I think it was her grandma's dog. He was a mean dog."
— Forrest Gump, describing what he understood about Jenny's molester father.
Advertisement:

A form of Dramatic Irony. A horrific event is understated because the narrator is very young, very naive or is intellectually disabled in some way, and doesn't really understand what took place. Alternatively, it may be obvious to the audience that something very bad has happened/is about to happen, but the narrator/character lacks the mental capacity to realize this and interprets it in a more "innocent" light.

See also Please Wake Up. A Tearful Smile may attempt to prevent a child's realizing another character's grief. Related to Unreliable Narrator.

Compare with Entendre Failure, which also involves naivete getting in the way of comprehension. See also A Tale Told by an Idiot, where the character doesn't have the excuse of being too young to understand what's going on.

Contrast Troubling Unchildlike Behavior, the near-opposite of this trope, where a child does not display the innocence typical of his/her age.