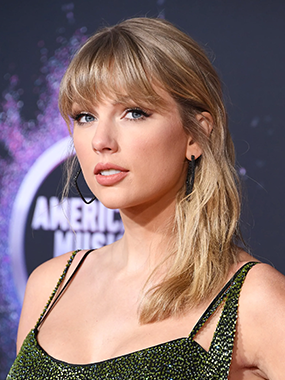 "But I come back stronger than a 90's trend."
Influenced by:
"I'm not that complicated. My complications come out in my songs. All you have to do to be my friend is like me … and listen."
Advertisement:

Taylor Alison Swift (born December 13, 1989) is a popular country-pop turned full on pop Singer-Songwriter from Wyomissing, Pennsylvania. She has been a defining voice of the 2010s pop music scene and was named Artist of the Decade at the 2019 American Music Awards.

Swift found herself interested in poetry and music from an early age, and won a nationwide poetry contest at age nine with a poem called "Monster in My Closet", learned to play guitar from a computer repairman at 10, sang the national anthem at the U.S. Open in 2001 at the age of 11, and was signed by Sony/ATV at age 14. Swift broke into the Top 40 in 2006 with her debut single "Tim McGraw", and has since achieved widespread appeal and success both in the world of country music and in mainstream pop.

Nine albums, two EPs, and five tours into her career (and counting!), Swift has seen all four of her country albums go to #1 on the country charts (and four albums, including the pop 1989 go to #1 on the Billboard 200), seven #1 singles on the country charts, dozens of songs charting in the Hot 100 (almost all of those making the top 40), gotten to #1 on the Hot 100 for the first time in 2012 with "We Are Never Ever Getting Back Together", has won seven Grammy awards, became the first female artist to succeed herself in the #1 spot in 2014 with "Shake It Off" and "Blank Space", and all of her big hits have crossed over massively. She's been certified by Nielsen as the most commercially successful country artist in music history and almost singlehandedly made the independent Big Machine Records label and her early producer Nathan Chapman big names in the country music industry.

In complement to her musical career, Swift has appeared in an episode of CSI as a murder victim, was the musical guest for two episodes of Saturday Night Live (a season 34 episode hosted by Neil Patrick Harris and a season 35 episode where she was both host and musical guest, becoming the second-youngest host/musical guest to appear on the shownote Britney Spears was the first when she appeared on SNL on the show's 25th season) and was one of the many stars in the film Valentine's Day. Her first leading film role was as the voice of Audrey in the film adaptation of Dr. Seuss's The Lorax. She has since played Rosemary in the film adaptation of The Giver; appeared As Herself in (and on the soundtrack of) Hannah Montana: The Movie and her own documentary, 2020's Miss Americana; and been featured in Cats as Bombalurina.

Tropes relating only to specific albums or songs can be found on their respective pages.

"These are the best tropes that have ever been mine":

Taylor Swift's music video for "I Bet You Think About Me" opens with Miles Teller delivering a speech that turns out to be given in front of a mirror in a public bathroom.

Taylor Swift's music video for "I Bet You Think About Me" opens with Miles Teller delivering a speech that turns out to be given in front of a mirror in a public bathroom.