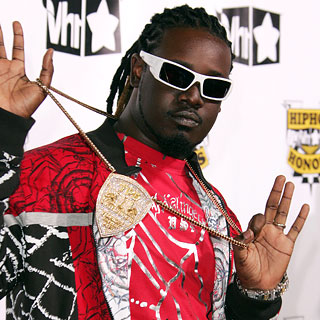 Faheem Rasheed Najm (born September 30, 1985), better known as T-Pain (short for Tallahassee Pain), is an American singer, rapper, record producer, multi-instrumentalist and dancer. He began his career as a rapper in the group Nappy Headz in 2004. In 2005, he released his debut album Rappa Ternt Sanga which reached number 33 on the Billboard top 200. He won a Grammy in 2008 with Kanye West for the single "Good Life" and another in 2010 for the single "Blame It" with Jamie Foxx. He is most known for his extensive use of Auto-Tune, and also for being in every song on the radio that Pitbull & David Guetta aren't already in. At one point in late 2007, he was featured on four top ten singles on the Billboard Top 100 chart.

In 2018-2019, he participated in the first season of The Masked Singer as the Monster, and won first place.