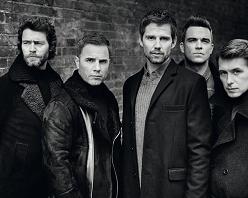 L-R: Howard Donald, Gary Barlow, Jason Orange, Robbie Williams and Mark Owen
Whatever I said, whatever I did I didn't mean it,
I just want you back for good,
Whenever I'm wrong just tell me the song and I'll sing it,
You'll be right and understood.
— "Back For Good"
Advertisement:

A British pop band, consisting of members Gary Barlow, Mark Owen, Howard Donald, Jason Orange and Robbie Williams. They had a wildly successful initial run as a cheesy boy band from 1990 to 1996. The band stood out from most of their Boy Band peers because Barlow wrote almost all of their material himself, compared to other earlier and later groups that relied on outside songwriters. The group broke up in 1996, just as they were about to break-through in America and shortly after Williams departed for an extremely successful solo career.

Robbie Williams has since gone back to focusing on his solo career (calling it a "hiatus" from Take That) and Jason Orange formally announced that he decided to leave the group permanently. Both departures were amicable and both of them are welcome to return whenever they want, with Williams occasionally rejoining the group for special appearances.

Take That are the second most successful British boy band of all time after One Direction.

The stage musical The Band is a jukebox musical of their work. It premiered in 2017, and became the fastest selling musical tour in the UK of all time.

Their videos and tours provide examples of:

Their songs provide examples of: