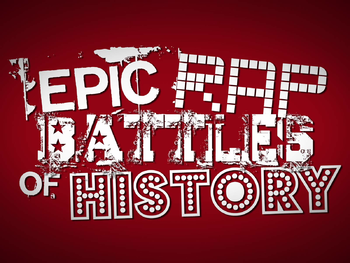 What happens when you take historical figures, popular media personalities, and fictional characters, and have them pair off and compete against each other... in rap contests?

You get Epic Rap Battles of History

. The YouTube web series is Exactly What It Says on the Tin — comedians Peter Shukoff (Nice Peter) and Lloyd Ahlquist (EpicLloyd), alongside guest YouTube performers such as George Watsky and Zach Sherwin (and even a few celebrities), portray these people Battle Rapping against each other in comic online videos. The videos are written by Peter and Lloyd themselves, the results of considerable amounts of research into each subject that make them absolute goldmines for Stealth Puns, Genius Bonuses, and other impressive showcases if you know to look.

Since starting in September 2010, the series has run for six complete seasons, with its seventh currently underway after premiering on June 14, 2021. December 2015 and 2018 also saw the releases of additional battles between seasons, with the 2018 extras being extended into a brief spinoff series, Flash-in-the-Pan Hip-Hop Conflicts of Nowadays, which simply featured Peter and Lloyd in a studio rapping as their respective characters for requests that they considered popular but not enough to warrant a full ERB production.note One of the battles covered, however — Ronald McDonald vs. the Burger King — would eventually be adapted into a full production in the next season.

, and the subsequent seasons on the official channel

for the show. You can also watch any episode as well as check out character bios and official voting results on the official website listed above.

Now has a Recap page which is currently under construction.