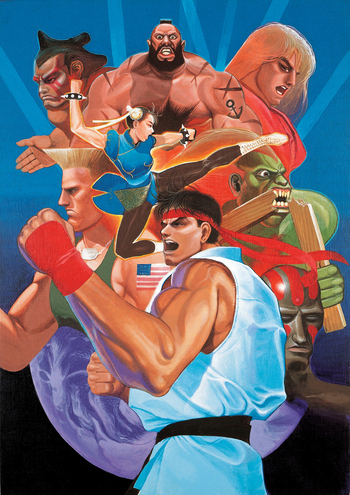 While certainly not the first Fighting Game by any stretch, Street Fighter II was the one which codified the genre and its related tropes, more notably the Shotoclone. It invented the fighting game definition of combos, which quickly became a staple of the genre. Fighting game-style combos later crossed over into other genres of games. Street Fighter II is regarded as one of the greatest video games of all time and the most important and influential fighting game ever made. Its launch is seen as a revolutionary moment within its genre, credited with popularizing the fighting genre during the 1990s and inspiring other producers to create their own fighting series. It sparked a renaissance for the arcade video game industry and impacted competitive video gaming and wider popular culture such as films and music.

Its success spawned countless copycats, from Art of Fighting (developed by Capcom's rival SNK and featuring the Ken lookalike Ryo Sakazaki), to the mostly-forgotten Fighter's History (Capcom tried and failed to sue Data East for infringement) and World Heroes, to bald-faced ripoffs like the creatively-named Super Fighter (not to be confused with the Newgrounds game).

Street Fighter II became the best-selling game since the golden age of arcades in the 70's and 80's. By 1994, it had been played by at least 25 million people in the United States alone. Due to its major success, a series of updated versions were released, containing additional features and characters.

Worldwide, more than 200,000 arcade cabinets and 15 million software units of all versions of Street Fighter II have been sold, grossing an estimated $10 billion in total revenue, making it the third highest-grossing video game of all time, just behind Space Invaders and Pac-Man, and held the record for the best-selling fighting game for 28 years until Super Smash Bros. Ultimate managed to surpass its sales in 2019. The Super NES port of the original World Warrior version sold 6.3 million copies, making it Capcom's best-selling single game until 2013, when it was surpassed by Resident Evil 5. However, it does remain Capcom's best-selling game on a single platform.