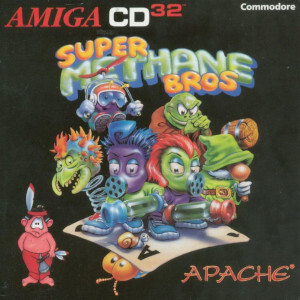 Super Methane Bros. is an Elimination Platformer. The original version for the Amiga and Amiga CD32 was released by Apache Software in 1994; programmer Mark Page produced a free remake

of the game in 2001 for Windows, Linux and RiscOS. It has subsequently been released for various mobile devices.

Puff and Blow are the Super Methane Brothers. They blast baddies with their Methane Gas Guns. The Tower of Time has 100 floors. The key to the tower is in four pieces.