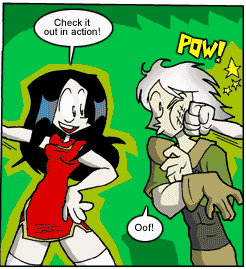 "All he can do is consume. He's pursued by demons that are probably just in his own head. And even if he does manage to escape by slipping out one side of the maze, what happens? He comes right back in the other side."
— Colin Ritman on Pac-Man, Black Mirror: Bandersnatch

A video game mechanic where the edges of the screen are hyperspatially connected: move past the left side, and you appear on the right. Or walk to the south, and suddenly you're in the north. It serves as an alternative to the Invisible Wall that would normally be present if one tried to walk off the screen.

Some games have used this mechanic in certain Gimmick Levels.

Wrap Around in some older games can also be unintentionally present and can be exploited only by using glitches. Tool-assisted Speedruns often exploit it.

Not to be mistaken with Wraparound Background. See also Unnaturally Looping Location, for an in-universe location repeating endlessly.

In an Old Spice commercial with Terry Crews, he punches a guy to his left by sticking out his arm to the right.

In an Old Spice commercial with Terry Crews, he punches a guy to his left by sticking out his arm to the right.