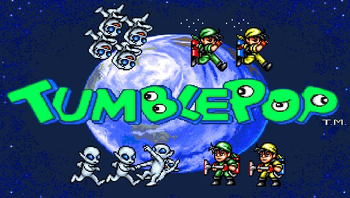 TumblePop was an Arcade Game made by Data East Corporation in 1991 which is now considered something of a Cult Classic, since it received only one port for Game Boy and nothing else. It's an Elimination Platformer featuring a couple of kids armed with vacuum cleaners who travel around the world to defeat various creatures and monsters: they suck the monsters up into the canisters of their weapon and then release them at high speed to create big balls of creatures that tumble around the levels, knocking down everything in their path...