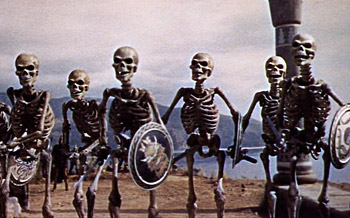 They've got a bone to pick with you.
"A walking skeleton, the basic frame of the human body, can inspire more fear in the common man than an excessively armed soldier or knight."
— Jacob Deegan, Dominic Deegan
Advertisement:

Animate beings constructed from ossific material in their entirety are a very common form of The Undead in video games, but much rarer in other media, to the point where, as an object of fear, they have become slightly camp. They're cousins to the Zombie in spirit, but remain explicitly separated in the public consciousness by the lack of flesh and other juicy bits. A likely explanation for their ability to see and hear, not to mention move without any muscles, and indeed their status as Perpetual Motion Monsters is a necromancer used Functional Magic to raise and operate them. Thus, these creatures are firmly inhabitants of Fantasy works. You might know them as skeletons. We call 'em "Dem Bones".

There are human, non-human, and weirder variants, and in 99% of their appearances, they're enemy Mooks. Their prevalence in Role Playing Games is owed to Dungeons & Dragons, which established them as the slaves of necromancers. When they aren't Mooks, they're usually liches, which are much nastier, because they tend to be powerful mages. Skeletal spellcasters who are not liches are rare (in cases where "skeletal spellcaster" isn't the outright ''definition'' of a lich, that is), but not nonexistent.

Often enough, Dem Bones are reused in the same game à la Underground Monkey. Expect, in the spirit of a Zombie Minotaur, to find double-category monsters, like a skeletal mammoth or dragon. Many games have even tougher skeletons that are colored red. This could be because the red ones are a little more skilled and covered in the blood of hapless adventurers who couldn't best them.

A prominent variation is a being composed of just a skull without a body. In this case, their ability to attack may be a simple bite, or through magic spells. They may or may not also have the power to defy gravity to compensate for the lack of legs. As trope examples indicate, there are a noticeably greater number of friendly talking skulls compared to the rare Friendly Skeleton.

In video games, skeletal foes will often attack by throwing bones. One cannot help but wonder where they get dem bones from. Some versions are difficult to harm with ordinary swords or arrows, but can be dealt with using blunt weapons or magic. But be warned: many have the ability to pull themselves back together after you knock them apart.

In Mexico, Dem Bones are called Calacas and are associated with the Day of the Dead holiday much the same way bunnies are associated with Easter, making them less common as stock spooky elements (they tend to be more comedic). It helps that said calacas are made of sugar and chocolate.

See also Skull for a Head, Calacas, and Stripped to the Bone. May or may not be prone to dancing. A unique example is The Grim Reaper, so ubiquitous it's its own trope. If the Skeleton is friendly and/or comical, it's a Friendly Skeleton.

Not to be confused with Bones McCoy, who has his own trope too. Also not to be confused with the Alice in Chains song "Them Bones", the rap group Bone Thugs-n-Harmony, the Batman: Arkham Asylum Gamestop Preorder map or Bones—the series or its eponymously nicknamed protagonist. See also Bad with the Bone if bones are used as Improvised Weapons, and Ballistic Bone if they're used as Abnormal Ammo.

If the skeleton is really a robot, see SkeleBot 9000.

As his name would imply, Jack Skellington is a skellington--er "skeleton".

As his name would imply, Jack Skellington is a skellington--er "skeleton".