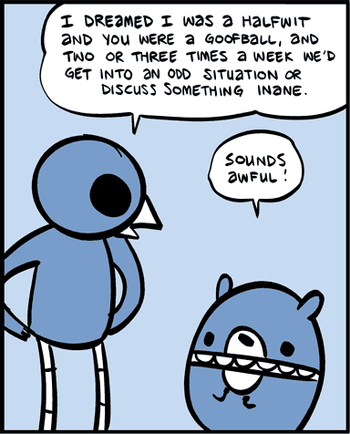 is the pen name of online artist Anthony Clark who draws silly pictures and comics "when there's nothing good on TV." You may recognize his work doing the colors for a—ahem—little-known comic called The Adventures of Dr. McNinja.

On his own site, Nedroid draws all kinds of interesting stuff—he has a special fondness for dinosaurs, ladies, and lovingly rendered landscapes following his self-image character, the Eternal Homeless Robot.

But the most popular and recurring subject, and likely the reason you're here, is comics based around the adventures of Beartato, Reginald and their friends, officially titled Beartato Comics (also known as Beartato and the Gang). Here are some of the characters:

Also of interest are his collaboration comics with Emmy Cicierega

(Yes, sister of THAT Cicierega) under the shared name Laserpony Studios. There aren't any recurring stories or characters, but they're always a new, surreal and hilarious experience.

Compare with Regular Show, which has a similar bird-and-mammal protagonist duo and absurdist sense of humor.