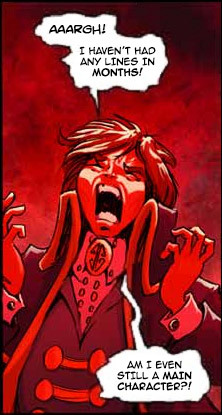 Gil Wulfenbach's lament during the Sturmhalten arc.
"Hello, my name is Tedd. You may remember me; I used to be in the story comics all the time. Weren't those the days?"
— Tedd, El Goonish Shive
Advertisement:

The spotlight highlights and shines brightly on one particular character, or on a select group of a particularly large cast getting the most screen time. They take center stage, right wrongs, find stuff out, do a bit of rescuing and learn all about themselves in the process.

Which is all well and good for those characters and their fans... but what about everyone else? Come to think of it, we haven't seen Bert in three months. Where did he go?

Out of Focus is the flip side of Character Focus. When they show less and less of a character, seen in the background flying under the radar in obscurity with extremely little screen time, living in the shadows of other prominent standouts. While someone's hogging the limelight with a lot of screen time in abundance, other members of the cast fly under the radar with a serious decrease in screen time. Particularly luckless characters may vanish for extended periods of time without any particular explanation, only to be brought back as if nothing's happened. A consequence of Creator's Pet. Webcomics are particularly prone to this. It's easy to see why — when you've got a cast of twenty characters and only four panels available, it's obvious that someone's going to lose out. If a character isn't central to the plot, with such limited space (and usually, time) available, it's probably a waste of time putting said character in at all. Webcomic readers usually understand this, but even the most tolerant and faithful of readers may get a little dissatisfied if a character, who was formerly one of the main cast, has been sighted less frequently than the Loch Ness Monster.

Sometimes Out of Focus is a necessary evil for the medium, as in webcomics. Sometimes, however, it's creator favoritism—they've got a brand new shiny character they want to flesh out, and everyone else is put on hold until they do so, or the comic has just changed writers and they prefer characters X, Y and Z to characters A, B and C. Occasionally though, it's just forgetfulness—the writer gets wrapped up in a Story Arc, and forgets that just because they know when someone is due to reappear, their readers don't.

Deciding if a character is Out of Focus tends to be relative to the media in which they appear. In a daily webcomic, for example, two weeks may be a long time for an absence. In a three-days-a-week webcomic, it may be over a month before it's noticed that someone's missing. In television, however, a member of the main cast who goes vanishes without explanation for a single episode had better have a damn good reason for their vacation when they get back, unless the show has a huge cast.

Likewise, audience acceptance is proportional as well. Webcomics are free, and therefore fans are generally more accepting if their favourite hero disappears for a bit. Too long, though, and the creator risks alienating a particular protagonist's fans. When someone has to hand over money to follow a story, however, as with comic books, they may get a little annoyed when fan favourite Mr. Terrific doesn't even make a cameo appearance for twenty issues.

Another good example for when this is a necessary evil is for Strategy games, in which Anyone Can Die and usually they're gone for good depending on the game. A good way to keep special characters in focus is to more or less program and write a lot of event data into the game, in the event that the player recruited the character and then still has them. But sometimes, the player may just dismiss them or let them die and they wind up Deader Than Dead, so in order to save time, the games are programmed under the assumption that they could be dead and that the only non-player characters that are still around are plot-crucial ones. A Real-Time Strategy game would often avert this by making it crucial (They die, you fail the mission and Game Over) or they die but are resurrectable. It's also possible to get around this where if they die in battle, they're merely knocked out and come back if needed.

If a character is absent for too long, that character risks suffering from Chuck Cunningham Syndrome, dropping off the face of the Earth, never to be seen again. Alternatively, these characters may be Put on a Bus or Killed Off for Real when the creator decides (s)he has no further use for them. If they return after the nature of the story has changed in their absence — for example, the plot has come down with a nasty case of Cerebus Syndrome — and they don't seem to fit in with the tone any more, they may become The Artifact. Out of Focus can be averted, or compensated for, by using Rotating Arcs or by the creator reassuring the fans that Captain Superhero hasn't died and will be back as soon as he's relevant to the story.

This also often happens for optional characters, but as you'll notice, they're...well, optional, so the events are written without them.

When a sequel or adaptation shoves characters out of focus and removes their plot importance, it's Demoted to Extra. If a major character is out of focus from the start, then you got an Advertised Extra. Contrast Character Focus, Spotlight-Stealing Squad.