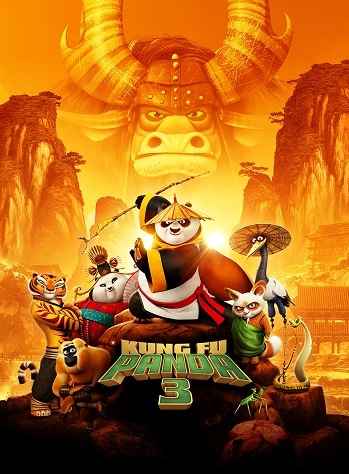 In the realm of the spirits, Oogway faces an opponent from the past, the evil spirit Kai (J. K. Simmons). Kai has waited five hundred years, gathering enough chi from late kung fu masters in order to defeat Oogway and return to the world of the living, something he succeeds in. Meanwhile, in the Valley of Peace, Po learns that Shifu is retiring and passing his role as the Furious Five's teacher to him, a position Po struggles to handle. His mind is soon diverted, however, as he is faced with the arrival of his biological father, Li Shan (Bryan Cranston), who takes him to a hidden panda paradise in the mountains. Things quickly go downhill when Kai arrives and wreaks havoc at the Jade Palace, leaving Tigress the only one to escape and warn Po of the approaching threat. Now, Po must gather his teaching skills in order to train the pandas into capable fighters that will help him defeat Kai, while also learning how to master the power of chi.

The first Chinese trailer can be viewed here

. The official US trailers can be viewed here

. The Japanese trailer can be viewed here