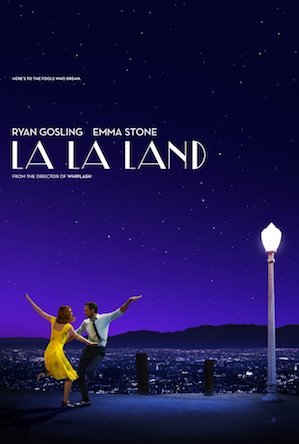 Is this the start of something wonderful and new?
Or one more dream I cannot make true?
— "City of Stars"
Advertisement:

The story follows two young people trying to make it in Los Angeles, the city of stars known for destroying hopes and breaking hearts — Mia (Stone), an aspiring actress, and Sebastian (Gosling), an aspiring jazz musician. They fall in love after a series of chance meetings, and try to make it despite their dreams growing at odds with reality — and eventually, each other.

La La Land premiered at the Venice Film Festival in August 2016, and was released on December 9, 2016. The film won the Critics' Choice Award for Best Picture, and won in every category it was nominated at the Golden Globe Awards, with a record-breaking seven wins. It also earned 14 Oscar nominations (which is a record, tied with Titanic and All About Eve), and won six, including Best Actress for Emma Stone and Best Director for Damien Chazelle.